An Article By Debbie Greenfingers with The Voice

I am writing about one of my favourite plants this month – Angels Trumpets. This is a fascinating plant with many aspects to it’s make up, both good and bad! We are featuring ‘New Age notions’ and healing benefits in this month’s magazine, so I can’t think of a better plant to feature than the Brugmansia which has a weird and wonderful past. 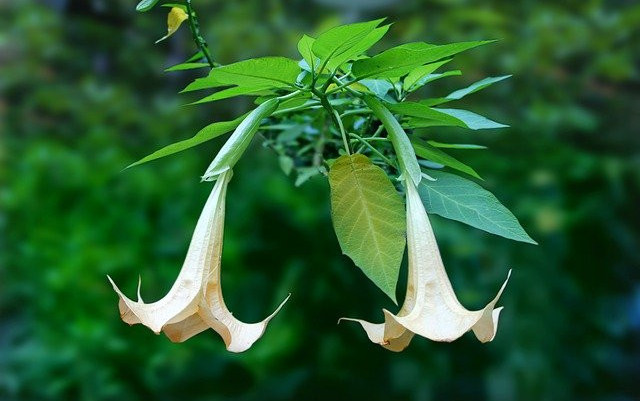 Known as Angel’s Trumpets or Moonflowers, these genuses of flowers are really beautiful and grow well on the Island, although caution is needed as they are highly toxic if digested. Growing to the size of a large shrub or small tree with large oval leaves, the Brugmansia is remembered for it’s truly beautiful large, pendulous, trumpet shaped flowers which can be single or double. The colours usually vary from white through the yellows to orange. Originating from South America – later naturalized in areas of Africa, Australia and Asia, this plant is easily grown in fertile, well drained soil (as well as in pots) in sun or part shade, and flowers throughout the year. 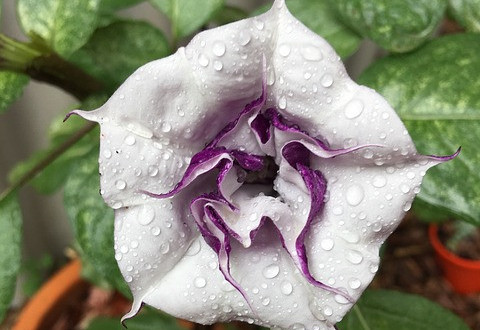 Angels trumpets is the most common colloquial name for these beautiful plants, although you will sometimes hear them referred to as Moonflowers too. But, to those in the horticultural trade, they are Brugmansia, a beautiful plant whose flowers have a strong scent that is most noticeable in the evenings and designed to attract pollinating moths. But that is not all they have been used for over the years. Like many other toxic flowering plants, they always have a use and Angels Trumpets are no exception.

The history of the plant is quite a story. The plant has many healing qualities and medical values which were used extensively in the past, although they can be artificially synthesized now, meaning the Brugmansia is no longer grown for healing uses and is more of a decorative plant nowadays. But, It was historically used for healing, usually externally, and for hundreds of years. It was often used to treat skin irritations and mixed into rub-on poultices and tinctures, as well as, widely used for aiding pain relief for Dermatitis, Arthritis and Rheumatism. 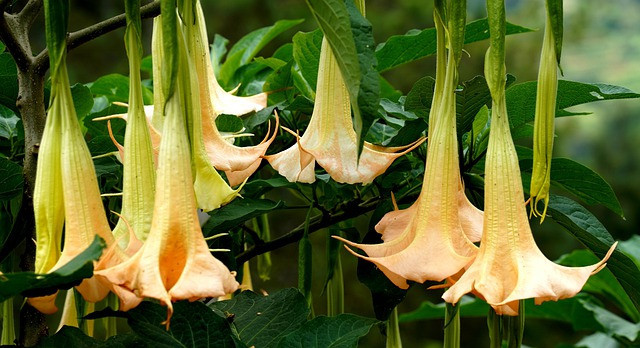 Although often used by medicine men and wise women for aiding irritations and skin problems, the Brugmansia also has a darker side! Going back hundreds of years it was used by the ancient tribes of the indigenous cultures of South America for Witchcraft. It was used traditionally as a hallucinogen for divination and a conduit for communicating with the dead ancestors.

Care needs to be taken around these plants and if you have pets, they should be kept well away. As, If the plant is digested, it can be very dangerous. Historically, it was often used to cause vomiting in order to remove worms and other unwanted stomach contents. It has also been used in torture, to extract information from captives… and of course, for seduction! Ultimately though, as it is so toxic and easy to get hold of, the ingestion of the Angel’s Trumpet has also been used for Murder! 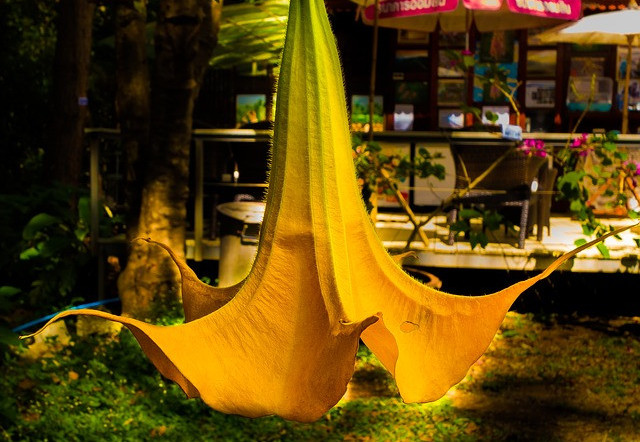 This are quite sinister facts and paint quite a vivid story for such a beautiful and peaceful plant. But, that is not the end of it. I have even heard that if you sleep under a Brugmansia tree, you can have fantastic and vivid dreams! ( I must point out that I personally have not actually tried this! )

Angels Trumpets – Where to buy them?

Although they are not sold extensively in the garden centres here on the island, it is available in Fuerteventura, you just may have to ask the people in the centres, as its unlikely part of the main displays. I have seen many different sized plants growing in gardens, so they do thrive here and look amazing. I personally like to source seeds from abroad and enjoy growing a selection of common and more unusual plants at the same time, to see which thrive here in our climate, and so far, Brugmansia seem to do really well and look fantastic when they flower.

So don’t be put off by the strange and dark history of this plant as it is a very special one to have in your garden. It will flower beautifully and provide you with visual pleasure all year round.